Do you know which car was the first to use composites?

Today, composites are being used in most automotive projects all over the world. But which was the first car to adopt this new technology? When did that happen? And which composite material was utilized?

If you are thinking about high-end cars built during the end of the last century and their carbon fiber parts, you are completely wrong!

This picture shows Henry Ford (yes, Henry Ford) and his composite car. In the late 1930s, Ford used Soya oil to produce a phenolic resin and thence to produce a wood-filled composite material for car bodies.

While the media of the day predicted $400 automobiles before the end of the decade, plastic-bodied cars never became a reality because the cost and curing time of plastic proved impractical.

Either way, it was the beginning of a huge journey for the composites! 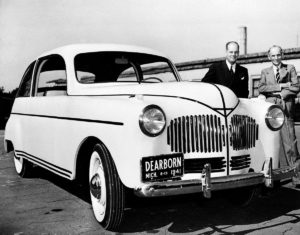 ← What are the differences between thermoplastic and thermosetting? Managing Composites closes 1,5M€ funding round by Bouwen, to accelerate growth →
We use cookies on our website to give you the most relevant experience by remembering your preferences and repeat visits. By clicking “Accept”, you consent to the use of ALL the cookies.
.
Cookie SettingsAccept
Manage consent