The MP4-1 was the first fully composite F1 chassis, rather than the traditional flat aluminium panels mechanically fixed together. It was 30% lighter than an aluminium monocoque with the same torsional rigidity.

According to John Bannard, the MP4-1 chassis designer, the project faced a lot of uncertainty and scepticism, especially related to fire/dust safety and how the monocoque would react to a big impact. 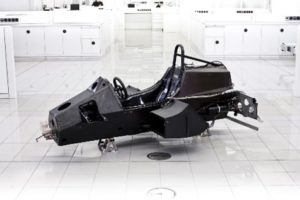 Things got off to a great start…

In its debut, McLaren won the British Grand Prix! However, during practice in Monza, driver John Watson got involved in a huge crash. It was the first time the carbon monocoque was put to the test in a real situation. The car hit the wall so hard that the gearbox casing snapped in half and the engine got ripped off the back. When all smoke settles, Watson jumped out of the car unharmed!

That accident set the tone for the carbon monocoque from there on after. It was the beginning of the safety cell.

← March’s top composite news! Monocoque Design Course →
We use cookies on our website to give you the most relevant experience by remembering your preferences and repeat visits. By clicking “Accept”, you consent to the use of ALL the cookies.
.
Cookie SettingsAccept
Manage consent